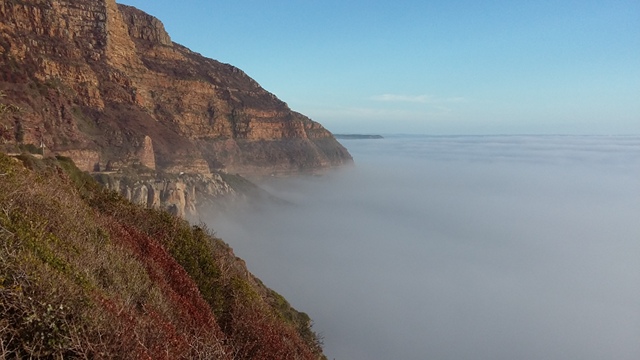 Cape Peninsula Cycling Day Tour we did recently, and the awesome view of Chapman's Peak above the Atlantic Ocean

On a recent Cape Peninsula Day Tour, one of our guides had the pleasure of showing Dave from England the sites of the Cape.

Meeting Dave was exciting for me as it was for him. His first time to Cape Town while on a business trip and in need of some serous R & R to clear his head. We headed south towards our first point of call, Boulders Beach and the penguin colony. But first we stopped in Simonstown,  a Naval base and home to the famous Great Dane “Just Nuisance” the only dog ever to be officially enlisted in the Royal Navy during World War II. The weather for this time of year was perfect, offering awesome views across False Bay. The penguins lived up to their reputation of waddling around like miniature tuxedo clad people. The nice thing this time of year is they have their offspring, up close and ready for the camera.

Dave decided to cycle from here, following the undulating road and passing a few troops of baboon, and their ever present baboon rangers. We stopped and had a chat, finding out all sorts of interesting information about their habits and life style and that the troop needs monitoring to keep them away from the residential areas. Since the recent fires that swept the Cape, food is scares and the baboon now go into the houses and tip the rubbish bins we were told, before continuing to the Cape of Good Hope Nature Reserve. On entering we spotted some of the resident zebra and ostrich down at the most south western point of Africa. The jostling to get a picture taken was done and dusted and Dave then took the walking trail up to Cape Point light house. We had a quick bite to eat but disaster struck, not for us, but two young ladies were sitting at a table behind us. Everybody was minding their own business and enjoying lunch outside in the sun. Little did anybody know, but a baboon decided to scale the electric fencing on the roof, and jump down, landing on the table behind us with a loud THUMP...shame, not only did the two girls shriek and run off after being robbed of their lunch, but we too, took a step back and watched this flee infested baboon enjoy his newly acquired free lunch.

Unfortunately the baboon at Cape Point have lost their fear of man, because they get given food by tourists wanting that perfect photograph. What happens now is, they just walk up and help themselves. And at the end of the day, the poor animal will need to be shot because somebody get's bitten. I can only ask and beg you, please do not feed the baboon...Anyway, we kept a beady eye on the thief and I can say this, it was the best sandwich I had had in a long time. Possibly because we were under threat :-)

We then continued via Misty cliffs and Chapmans Peak from where Dave decided to cycle the down hill into Hout Bay. The view today was very special because of the low cloud and clear blue sky.

Getting back into Cape Town, I dropped him off at his hotel and a great day was had by all. If you are interested in this tour, please have a look at our Day Tour packages. We have both Road Cycling and Mountain Biking tours to offer.