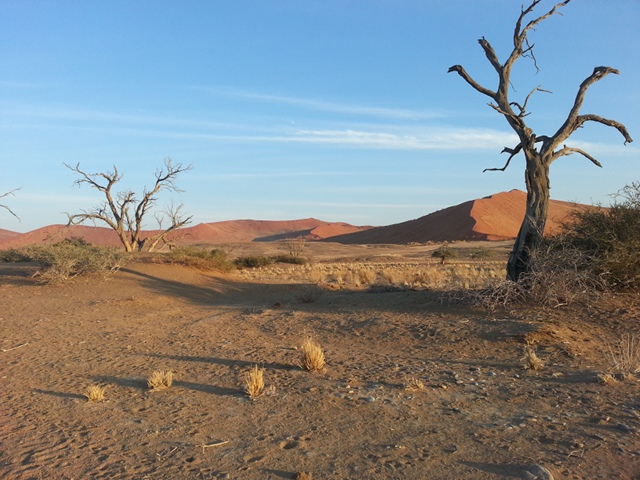 Cycle and experience the highlights of Namibia from a mountain bike...

Coming from Cape Town I had left a cold and wet climate, to arrive in the capitol of Namibia, Windhoek. It was nine o clock in the morning, freezing cold but a clear blue sky. From my past trips to Namibia, I knew that cycling this wonderful country during their dry winter months (June, July and August) was the best option. The mornings and nights can drop to a cold 6 degrees, with a day temperature of well into the 30 degrees, depending on where in the country you were. It was not long and I was stripping of my longs and fleece top to make way for shorts, before heading to the airport to meet my group of six guests.

Their arrival was swift, money was changed and we then headed back into Windhoek to our first nights accommodation, ideally situated on the outskirts of the capitol, away from the hustle and bustle. Before doing our bike setup and adjustment, the group had time to either relax from their international flight or go into town and take in the sights. During our first group dinner that evening, the guests were welcomed and a brief tour description was given and everybody then knew what was coming and what to expect for the next few days, before hitting the sack and going to bed.

Our start today was an early one, driving a short distance heading west out of Windhoek and to the start of our first cycling day through some awesome farmlands and rolling hills, and getting our first glimpse of local wildlife. We saw kudu, warthog and a troop of baboon going about their morning ritual of foraging for breakfast and sunning themselves, trying to take advantage of the warm sunlight so early in the morning. Our accommodation for tonight was on a private farm with swimming pool and a thatched roof entertainment area come restaurant and bar. It's amaizing how quickly things cool down as soon as the sun sets this time of year. It was not long before we were all around the fire with a beverage of sorts in our hands and chatting about the days experience.

Our breakfast this morning was a camp style breakies, remember this trip was a combination of camping and the use of different kinds of accommodation. The first thing that was demanded by all was the hot water kettle, bubbling away on a gas burner and never really getting the chance to cool down as the demand was high for a warm drink, together with a very professionally prepared continental  breakfast. After which, we cycled directly from the farm heading deeper into the interior, and closer to the highest dunes in the world, Sossusvlei. On our route today we saw loads of game, our highlight was the endangered Mountain Zebra but also the tracks of a brown hyena. Getting into Solitair for lunch and the world renowned apple crumble just topped things before we continued to our first camping night within the Sossusvlei park. This meant we could leave an hour earlier before the main park gates opened for the general traffic, giving us an advantage to be on Dune 45 by the time the sun rose and back at our overland truck having breakfast with the most amazing view, before starting our 45km cycle back to the main entrance on the tar road for a deserved lunch and to pack the camp.

Cycling the Namib Naukloof area was one of contrasting landscapes, with a mountain range on one side, and the dunes on the other, and in between this lot were the desert adapted oryx antelope, open plains of golden colored fields, and mountain zebra. We also cycled past the Hano Martin cave, a hideaway during the second world war for two German geologists, our tour leader told us about their peril and hardships as we cycled deeper into the Kuiseb Canyon, before loading our bikes and headed towards the coastal town of Walvis Bay. Our stop here to see the flamingos was short and sweet due to the cold temperature and the fog bank hanging on the horizon, making things very cold.

The following days cycle was towards Henties Bay, and by means of a salt road parallel to the coast, passing a ship wreck and crystal sellers. In the distance one could see the Matterhorn of Namibia, the Spitzkoppe, and our destination. Tonights accommodation was camping at the foot of the highest mountain in Namibia, the Brandberg, and home to the elusive dessert elephant that roam freely through Damaraland and live in harmony with the local nomads, the Himba tribe.
The camp assistant cooked up a feast for us over an open fire and cooking on the traditional three legged pots, called “poitjies” After dinner, I decided to sleep on the roof of our truck, this was an awesome experience as the night sky seen here in the field is one to be remembered.

Our early start as usual was after a cooked breakfast, while the staff did all the dishes and packing, the group went over to the main building and reception area to take pictures of this oasis and also try get the friendly meerkat to stay still long enough for a picture, before we headed out on our cycle. From previous trips in this area I knew the chances of seeing the elusive Damaraland elephant was good, if not them in person, then at least their tracks, which we did see to great enjoyment by all. Just knowing that these gentle giants can roam freely kept all of us on our toes and upright on the saddle.

We overnighted without much excitement in Khorixas before heading to the second highlight of this trip, Etosha National Park. Here we spent two nights camping in Okaukujo, the main camp and research centre, with it's floodlit waterhole. The brave ones in our group spent most of the night there and were rewarded with lion, rhino and elephant. During the day our overland truck did the usual morning and afternoon game drives. On our last afternoon in the park, we were fortunate enough to see an Aardvark. I had only seen one once before in Etosha while woking back in the early 80's WOOP WOOP....

Our cycle trip was coming to an end, this second last morning had us cycling from the main park entrance towards Outjo, a small town some 110km away. I don't normally enjoy cycling on a boring tar road but today was different. The air was fresh and the bikes just seamed to roll by themselves, passing game fenced farms and acacia savanna. After about 60km, we loaded the bikes and headed through Outjo, (well deserved coffee and cake stop) and towards Otjiwarongo and the CCF. A chetah rehabilitation and conservation project where orphaned animals who had lost their parents due to being shot by farmers, were taken in and raised and later released in the wild. This was a very interesting tour and very informative. After lunch we headed to our last evening of accommodated luxury, the Waterberg National Park, known for the Battle of Waterberg and the hike one can do in the late afternoon. It was during this hike, and while sitting at the top of the world taking in the immense view of open plains that we noticed movement around our truck below us. One of our windows were left open and a little black figure was seen climbing into the vehicle, not just one, but a few black figures. With that our driver who had joined us jumped to his feet and dashed down the mountain to save what was still to save of the fruit bowl and snacks. It turned out that the local troop of baboon often come into camp and search the bins, in our case they struck lucky and scored GOLD.

The last day of this 13 day camping and accommodated holiday was closing fast, we headed back to Windhoek, some 5 hours drive away but stopped at the handcraft market in Okahandja, here the locals can be seen carving away producing locally made arts and craft. Getting to airport was punctual and like any tour, the goodbyes are always difficult, especially after enjoying a tour like this.

In closing, I'd like to say thank you to the superb camp staff members who produced some great meals under rudimentary conditions and open fire, and their ability to be creative, especially having had one vegetarian on tour.

If you enjoyed reading about our recent camping mountain bike trip in Namibia, have a look at our 17 day accommodated Cycling Tour of Namibia