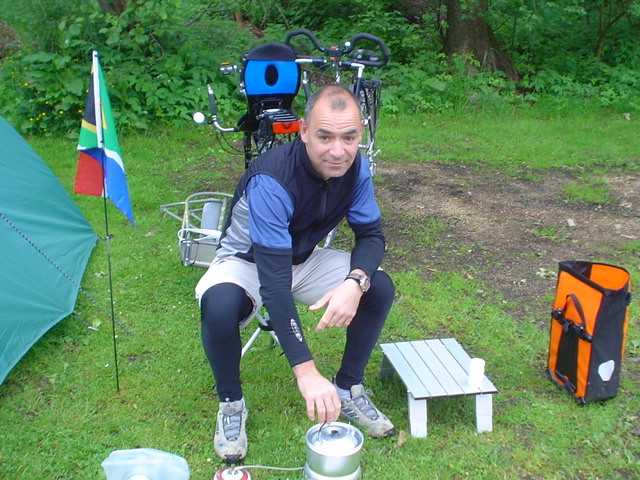 My first experience with touring by bicycle started when living in northern Germany. At the time I had been rock climbing and never thought of touring by bicycle. My climbing partner introduced me to this new form of travel which I took too quite quickly and bought my first touring bicycle, a Peugeot something or other. Nothing fancy but it did the trick. I bought my first pannier bags from a local department store (which I still have to this day, almost 12 years later). Fully laden we headed off on our first bicycle tour along the North sea, following a well defined bicycle route guide. Our overnight stops where camping sites along the way, where we would cook our own meals using a little gas stove and billy. On the odd occasion, we'd use the local restaurant/coffee shop. We did a few of these weekend away trips enjoying the hospitality of the north Germans.

A few years later I relocated to a different area, also up north and met a serious group of recreational cyclists, this group would go touring almost every weekend, and when they did, they were more than likely 5+ strong....I would join them with my novice equipment and heavy camping gear but have a good time. It was with them, that I started to take my bicycle touring seriously and to the next level.

I invested and bought a Recumbent - “Street Machine” to be exact. This was a beast of a bicycle. I was so proud when I pulled up to our meeting point for the next weekend away. You should have seen their faces !! Anyway it did not take long before I had scaled down on equipment weight, this generally means after some touring experience and seeing what works best for you, and what the wallet can afford. I started to purchase quality equipment. My recumbent got new panniers, back roll for sleeping bag and tent and some new camping utensils, and the longer tours were on the list, meaning three weeks away, yes annual leave was spent cycling around the country. My space available was limited, so after careful consultation with our group guru, we decided I should invest in a trailer, so the Bob Ibex (mono wheel, with rear suspension) was added to the growing list of toys. One of our group members was a fanatic, all his gear was from the best money could buy, titanium cutlery, quality hillerberg tent, all burning fuel MSR stove and the list goes on. It was with Ingo that I started to tour during the colder months. It came to a point where NOTHING would stop the two of us, come rain, snow or sunshine. And so winter bicycle touring started.

Travelling in snow and over iced surfaces on a recumbent is no fun. The good thing though, the fall is less than a meter. Nothing like having your small front wheel slip out from under you and over you go. I must admit though, falling off the Street Machine was a lot more fun than a standard bicycle. The other disadvantage was sand, oh how I battled on the odd occasion. And so the decision to upgrade was born, but also, I had been cycling many thousand kilometres per year by that stage and gained the needed experience, but also notices that I was at a disadvantage to my fellow cyclists. They would often call out “Hey Stevo, have a look over there....” Thanks guys, you sit there like cranes with extended necks being able to see for miles, while I hug the ground and enjoy the beetles I pass. I did have a speed advantage though but nothing else. All in all, if you do not have a back problems where that support is needed, I would not suggest a recumbent to anybody. I had my fun at the time, but I needed to move on.

Over the years of bicycle travel, I'd like to mention that alone too work, I would cycle 250km per week, take this over a year and add our weekends away, I had gained not only the fitness required but also the experience and the idea of cycling back home to Cape Town through Africa was born. And the Koga Miyata was bought. For those of you who do not know, Koga is a hand made bicycle of the finest quality, built by our Dutch friends. I found that the bike travelled best when fully loaded. And this I did, four large panniers (lowriders and rear) with a roll on the back for my sleeping goodies.