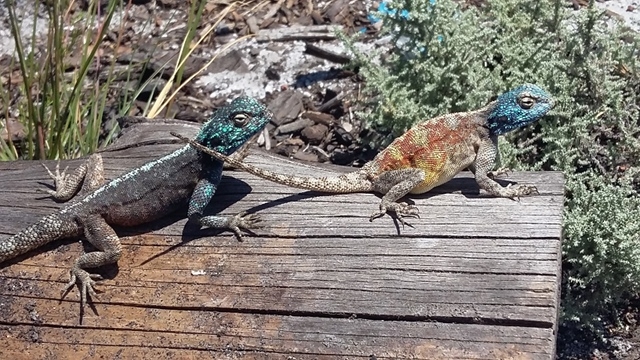 Spent a week mountain biking in and around Stellenbosch, Paarl and the Elgin Valley. Experienced some really nice single trail...

I was contacted a few months back by a couple who were looking for something to do while in Cape Town. They were invited to attend a wedding in Stellenbosch and wanted to do some mountain biking afterwards, and have some form of adventure holiday. Their wish was to have a base in Wellington, then venture out and do a number of day tours, it was up to Cycle Africa to then find the accommodation and also select some mountain biking trails to suite their ability and technical know how...

The next few days of Day Tours on our list was a mixture of biking as far afield as Grabou, nestled in the Elgin Valley and home to our apple and pear growing region of Cape Town.
Oak Valley – ideal estate to cycle on, here you find a number of routes catering for the avid single trail enthusiast to the more relaxed routes, all of which are color coded and easy to follow. Erich who had just flown in from Europe was still having a few climatic adjustment problems, it was very hot this day. We met up with another group, and it was decided that Erich would join the others who were cycling along at a leisurely pace, and his wife and I would continue as normal, mixing the colors of the different routes, this way everybody got their fare share of adrenaline and work out  as we followed the trails. Bumping over bridges, swooping down and round the ‘Berms’ and generally having a blast of a time.

Next on our cards was to cycle the forestry area and again in the Elgin Valley. This area in Grabou is managed by MTO and consists of forestry gravel roads with some single trail to choose from. A very difficult area to navigate as it’s a working forest which means the trees are continuously being removed and new ones planted, also the signage gets knocked over and not really replaced. Some of the local mountain bike races also come through here and their signs are also up which can confuse the best of us. Having being here a number of times over the years, we have gotten to know the trail system and navigation can be done with our eyes closed. My idea today was to to mix the “Black, Blue and 4x4” track to gain some altitude, offering a fantastic view down into the valley. The going was steady to the upper most reaches of the area and followed by some good downhill track, at times it was a bit loose, but then we got to some great single track and enjoyed the simplicity and at times rolled over some sandy underground. The view from our highest point looking down over the Eikenhof Dam was breath taking and well worth the effort to get up there.

Mountain biking Dirtopia Trail Centre – Erich was interested in trying some single track as usual, so I decided to mix the ‘Blue and Black’ marked routes for him and his wife. Heading off as we normally do and following the ‘Blue/Black’ route, I noticed signage tucked away in the distance and off the current trail...woop woop went through my mind, (could this possibly be something new) and so we turned off the current track and found something I had never been on before. Some really nice single trail heading round the base of the berg on the northern side and then weaving its way back down east, to then connect lower down with the previous ‘Blue’ trail. The only problem was, we had lost altitude and needed to climb back up to where we were and continue the original plan. Getting back to the Trail Centre for lunch, I asked the chap at reception and he was pretty excited that we had seen the signage as Meurant Botha the owner and trail builder of the property had not yet made it official, hence the obscure route to see the new board. If you are in the area, I can highly recommend finding this hidden black trail.

Rhebokskloof – Our biking day started early as the Cape was experiencing some really hot weather and by 09:00 we had just below 25 degrees. On days like this we found a water bladder carried on your back very useful and not just a single water bottle on the bike. I noticed that trails were being built and almost complete as we drove onto the wine estate. Again I had been here a few times and new the original route taking one to the top lookout point before hitting what feels like a never ending single track back down to the start. As we ventured along, there was all sorts of new signage in place, narrow tracks crisscrossing with tape across them, wooden bridges going up and trail builders around doing maintenance. Getting back to the restaurant for lunch I was told that a private company called Hero Adventure Trails had taken over and about to launch the new system. Today you can choose between five trails, from family/ beginner to hard core biking. A visit we can recommend. The restaurant is affordable and serves yummy lunch.

After a memorable week of mountain biking and doing lots of sweating together and sampling not only good food but awesome wine, Erich and his wife flew back home and promised to be back soon. If you would like to have a Custom Tour tailored to your needs and abilities, please do not hesitate to contact us.